One of the best things that I have done in fishing was to join the Catfish Conservation Group. I went to the fishing show at the NEC in Birmingham and met some of the members on their C.C.G stand. Coming from Bristol I did not have any catfish in any of our local waters so I knew that I would have to be prepared to travel a fair journey to get to fish for them. I went to the C.C.G annual general meeting at Oxford to learn more about the Catfish, at the time there was next to no information available to learn how to fish for them. At the meeting it was announced that there was to be an organised fishing trip going abroad to Schnackensee Lake in Germany, I decided to go on this trip there and then.

This was to be my first proper fishing holiday abroad, I was lucky to meet some really good friends who I still see and fish with today. They are Barry Sherrington, his son also called Barry and Jason Stanbridge, the four of us fished together and had a great time. We managed to catch some mirror carp between us but the catfishing seemed very difficult. One of the days I did hook into an absolute monster, which ran to my right smashing through 5 other lines before another angler struck cutting through my line. It was hard work with no night fishing allowed; we were getting up around 4:30am because you could not start fishing until 5:00am. We went down to the lake all ready to fish. I was free lining some lobworms dipped in a liver powder, I flicked out my lobworms gently just over a rod length, then I sat down quietly and waited. After 8 minutes I had a couple of twitches on the line then the line started to pull off the reel, I folded my bail arm over and struck. The fish went down to the corner of the lake on its first run but that was only about 30 metres away, afterwards turning and coming back to me. Although the fish did not have too much room to run away from me it kept going back down to the same corner, the fight lased about 25 minutes before it was safely netted. We were all amazed at the beautiful colour of this catfish, we weighed it and settled for 77lb.

After taking some photos we returned the catfish and I held it in the water for 20 minutes as it recovered, afterwards it gently slipped away. 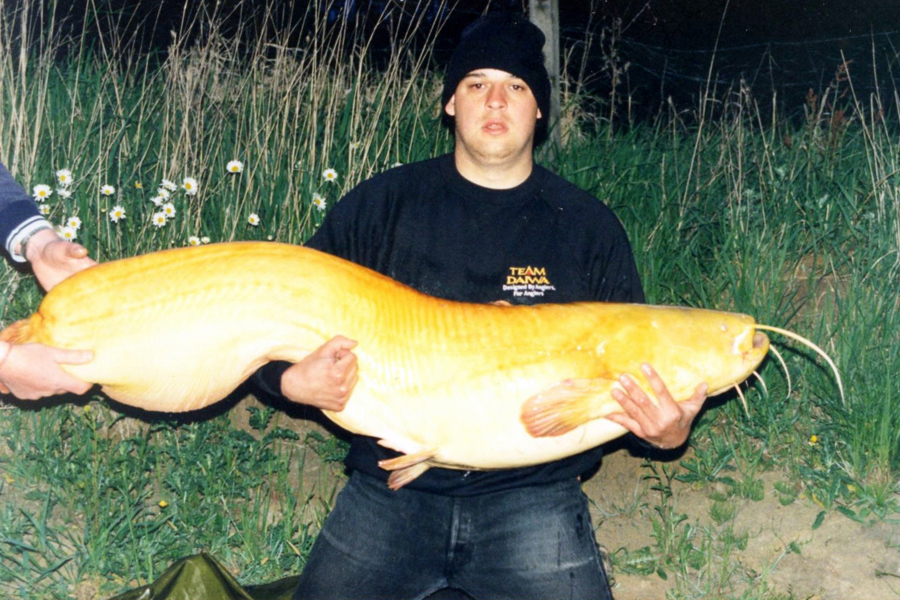 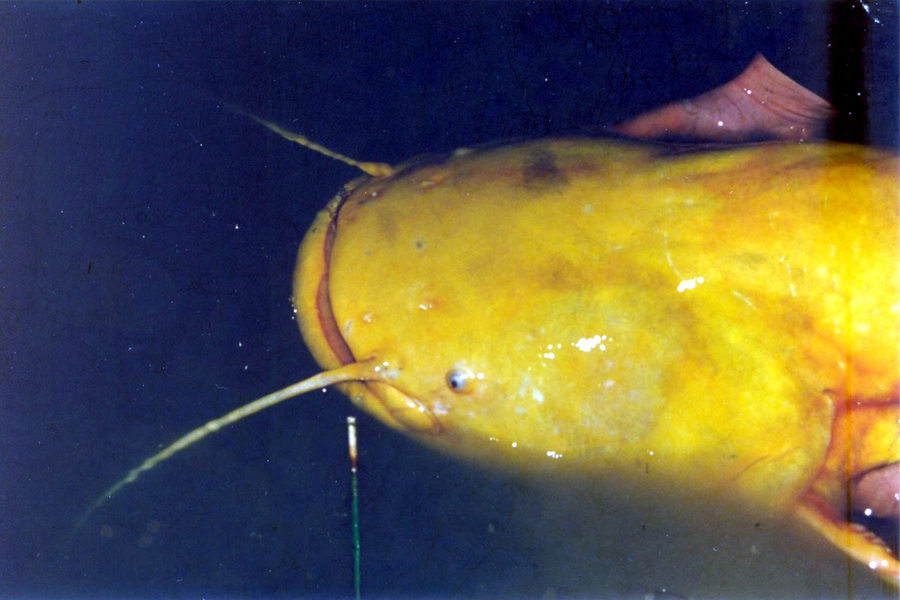 It was August, and I was back in Germany. The venue was Schnackensee near Gunzenhausen. This was my third trip to the water but this venue was where cat fishing had all begun for me on the last of the C.C.G overseas trips. On this occasion, there was only two of us; Jason Stanbridge and myself. There was no night fishing allowed at Schnackensee, although you can start at 5:00am and fish until 9:00pm. After this you have to leave the water and go to the camp site. This rule made fishing hard work as you had to get up early to get a swim, no swims are reserved as it is a day ticket fishery. There is also a two rod limit in force as well as a no live baiting rule. On my left hand rod I had been fishing leeches and because the action was slow the right hand rod was fished on the method feeder, ground baiting heavily with tiger nuts and boilies in balls about the size of a tennis ball. Over five days, I had carp from two pounds up to 19lb 12oz, they were a mix of ghosts, commons, mirrors and grass carp, which made a nice change.

About twice a day a big cat would show up but they would not go down on a feeding spree. I had with me Natural Plus Liver Boilies, Squid Boilies and Squid but nothing was working for the cats, I even caught a six pound zander on a liver boilie. A change was needed, so Jason and I went into town to see what we could find in the supermarkets. Jason chose a packet of Octopus and I went for a packet of mussels and also some more squid. We were almost ready for the next day but I still thought more changes needed to be made. I decided to fish with an open bail arm clipped up rather than on the bait runner.

It was soon time to try yet again and as we approached what we thought were are swims I noticed about six other anglers right across them. After talking to each other Jason and I decided to fish another part of the lake, both my rods were cast out about thirty yards to within a yard of the far bank. There were reeds all across the bank and the depth was about four and a half feet dropping deeper towards the middle. Mussels were fished on the left hand rod with about half of the 500 gram packet fired around the hook bait. Squid was fished on the right hand rod. I was just getting ready to sit down when it started to rain so I set up my brolly and got all my tackle in just in time, before the rain really started hammering down. This carried on for about five hours.

After looking around, I noticed about forty slugs; all under my brolly, they were up to four inches long, thick and black, so I gathered them up thinking a more natural approach was needed. I changed the squid rod to the biggest slug I had and cast it back out before firing out about thirty slugs, all very close to the margins of the far bank. At about two o'clock in the afternoon, the rain had cleared and the clouds soon disappeared. Under the brolly, I had been bored and had tied up some new hook links and was ready for my final approach. Walking to the on-site tackle shop, I worried about my poor German. On entering the shop, I walked up to the lady and said "Vorms" and used every finger twice, after a strange look from her I was given twenty worms; they were Canadian night crawlers. After returning to my swim, I threaded part of a worm on a hair then a piece of foam then some more of the worm followed by some more foam and then a stop. Two more worms were put onto the bend of the hook and then they were dipped into the water and balanced with a depth charge. I then shook the majority of the water off and dipped it into Big Fish Adventure's Bio-Logic Liver dip which is a powder. After a couple of minutes, I tied the hook link onto my right hand rod and cast to where I had put the slugs in. I clipped the line-up just enough so that the wind would not blow it out.

At about 4:30pm my right hand rod bleeped away, with me flipping the bail arm over and connecting into a good fish which fought hard after making several runs. After twenty minutes, I got the fish to the bank and Jason netted it. The fish weighed forty five pounds and after some photos were taken the fish was held in the water for nearly ten minutes until it swam away. 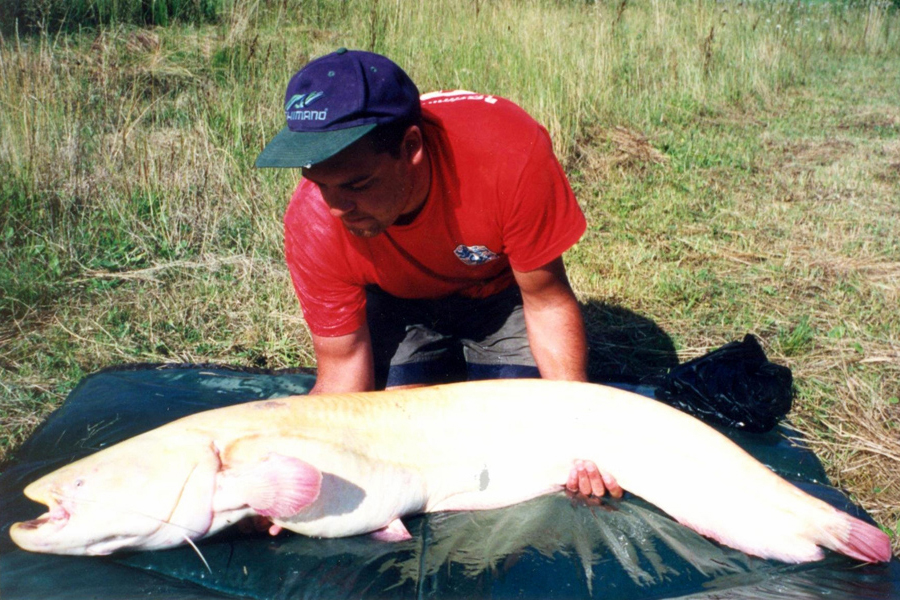 My right hand rod was then re-baited and dipped again followed by casting to the same spot from where the catfish had been taken. I moved my rod pod and put the rod over on the left, then the other rod was set up the same with worms for bait and recast to the right, about twenty yards away from where the fish came from. Within an hour the same rod went again, this time it was on the left. Folding the bail arm over I connected with a better fish. This fight was a lot harder, making longer runs along the margins and nearly around a corner with me following it. After thirty minutes, I got it up to the net, it looked like it was beat and his nose became level with the net, he turned right around and went forty yards down the left hand margin straight into some tree roots. I passed the rod to Jason so that I could put on a glove and then I jumped into the water. Following the line, I waded across to the tree and reached under to the roots, pulling them gently. The cat swam out into open water, the line was free and unmarked, I climbed out and got the rod back and at the next attempt the fish was landed. This fish weighed sixty one pounds and was returned after some photos were taken, it swam straight away. 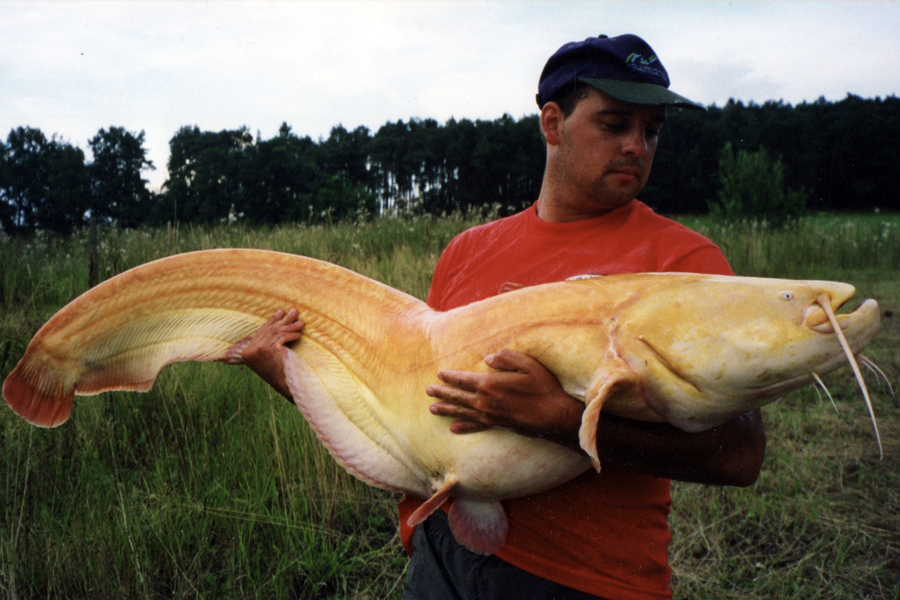 Who would have guessed that I would have caught an albino brace?
As for the tackle used; the rods were Kevin Maddocks' Challengers twelve and a half foot and three pound test curve. The reels used were Shimano 6500 Baitrunners filled with Big Fish Adventure's 25 pound braided line called Sinking Sensation.

Whiskers Article - A Goonch
It all started near the end of a fishing trip as do most of mine, planning one trip before the other is over. Graham Lawrence and I were in the Amazon on a trip ran by Arnout Terlouw, he also had 5 other Dutch friends and one German lad fishing with him. We had been fishing lake Tucurui for Catfish, Rays, Peacock Bass and a few other species when Arnout suggested going upstream on the River Tocantins which flows through the lake. I was straight up for going for more Catfish but some of the group including Graham wanted to stay for more Peacock Bass fishing, so it was agreed that the group was to split...
Read full

Catfishing in Asia
Over the past twelve years I have been fishing for various species of catfish from around the world. There has been one catfish from Asia that I had never caught before and I was very keen to learn more about this extremely unique species. This fish has had many globetrotting anglers from all over the world talking about it, most of the fishermen I have met claim that this is the hardest fighting freshwater fish on the planet....
Read full

With a lifelong interest in fishing, Etang de Azat-Chatenet fishery was set up in 2004 after moving from England to this wonderfully peaceful fishing lake with accommodation in the Creuse area of France. Read more about owner James Peacock...